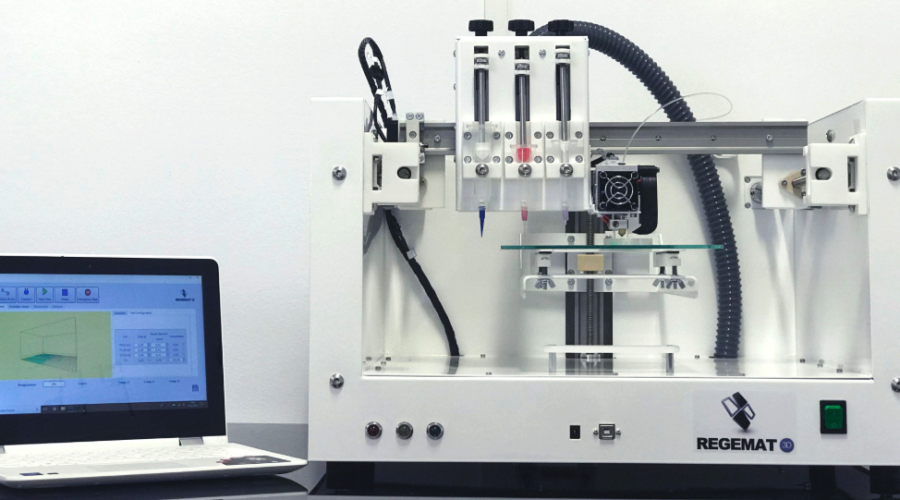 Early 2011, José Manuel Baena Martinez founded BRECA Health Care for the development of 3D printed patient specific medical devices. At that time, 3D printing was not as popular as it is now. Many people told José he was never going to bring it to the clinical application. Now, BRECA has dozens of successfully clinical cases around the world.

Also in 2011, he started to develop the project REGEMAT 3D, aiming at developing a 3D bioprinter to allow to print biodegradable parts and tissues to complement the use of 3D printed medical devices with tissue engineering and to offer a personalized solution to each patient that not just reconstruct and injury but regenerate it. José’s entrepreneurial spirit is triggered. “We still have a long way to go before we can print functional organs.”

José was born in Valencia, Spain in October 1983. He studied engineering in Valencia, Braunschweig, Germany, and in Oxford, UK, where he got his MSc in Motorsport engineering supported by the grant program of F1 world champion Fernando Alonso. He also has studied in biomedical engineering in Buenos Aires, Argentina, and has recently finished his PhD in BioMedicine in the University of Granada. 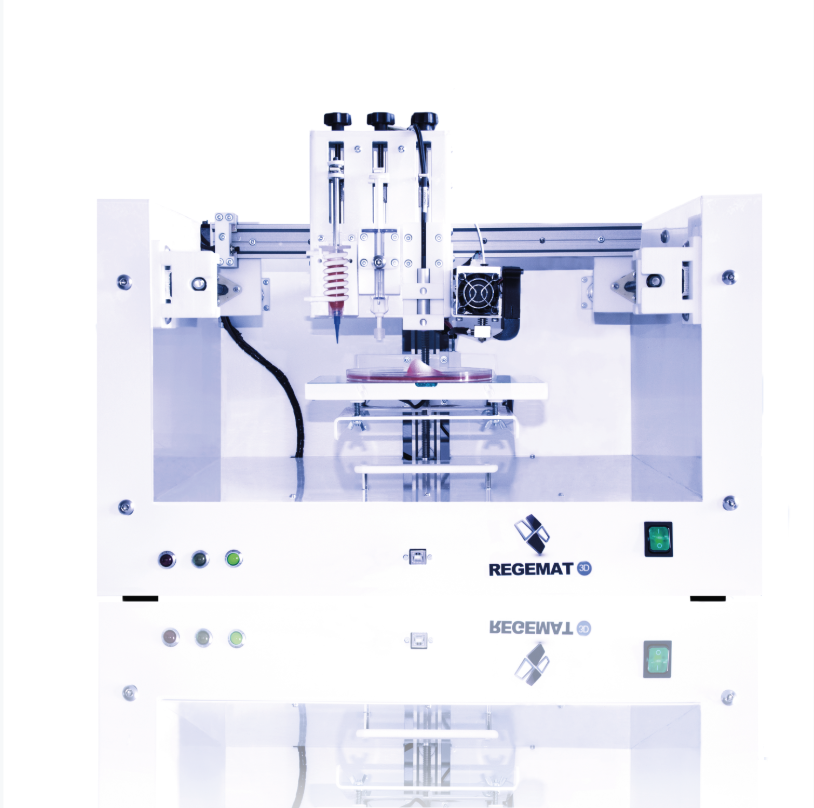 “Many years ago, I decided to focus my career on the intersection between engineering and medical sciences. I could have worked designing cars, but medical devices were more challenging for me. Ten years ago, I was a researcher, designing custom made implants, and I thought that 3D printing could be used for making amazing customised implants. That led me to the foundation of BRECA Health Care.”

Back in 2011, a researcher from the University of Granada asked José to develop a system in which cells could be printed rather than Titanium, to solve the problems of apoptosis and dedifferentiation he had working in 2D cultures. At that time, the number of available solutions was zero. “This is how I got inside this wonderful industry. Some years later, I started REGEMAT 3D to bring to society the results of our developments from 2011 onwards. Now we have a presence in 25 countries.”

Early in 2018, thinking about his future research after the PhD and as the life of a world travelling startup CEO was getting quite dull, José decided to get involved in a research group with a clinical focus to bring new treatments to patients. “That is how I got involved in the PITI3D platform as a Scientific Coordinator and key figure in the startup of the platform.”

Bioprinting as a hype

According to José, bioprinting now is a kind of hype. Biological science can benefit a lot from the ranges of different technologies, but he clearly states that we are not going to be printing functional organs in the short term. “You can say that to do an IPO and get funding, but after some years, when results are not as expected, you are going down the drain (case of Organovo). I saw it also many years ago with 3D printing in medical devices. Only recently, it has become a proven technology that has found its place in the market.”

What José wants to make clear is that a bioprinter does not print a tissue. It is a matrix, a scaffold, with cells in 3D, that, as is shown many years ago, behave in a similar way to the cells in vivo, but still a procedure is needed to have a functional tissue being implanted. Mechanical stress after printing and other ingredients play an essential role in the outcome of the tissue. “We think of bioprinting as an amazing range of technologies that help researchers who want to mimic living structures to achieve their aims, but there are still many things to work out to cover all tissues. That is why we in REGEMAT 3D offer not just a bioprinting system, but a customised solution for every specific application.” 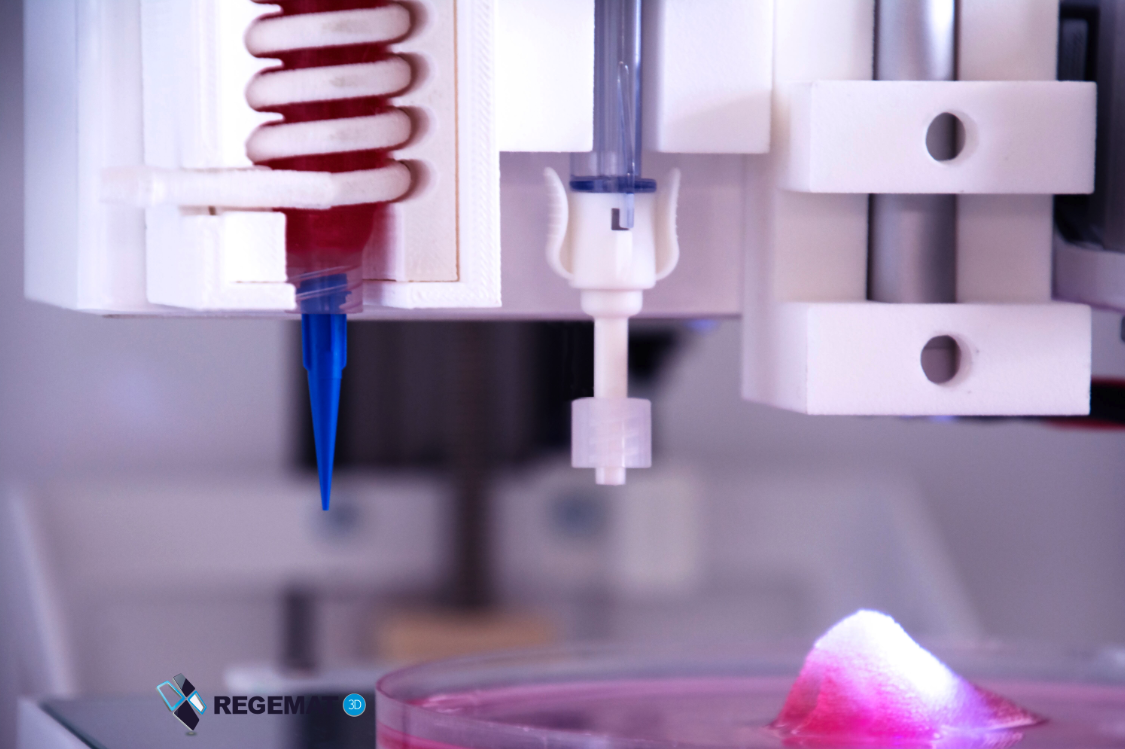 The combination of synthetic and bioprinted medical devices

In the short term, José sees many opportunities in the combination of 3D printed custom made synthetic medical devices and bioprinted structures to regenerate an injury. In the past, if you wanted to do a reconstruction using biomaterials that biodegrade, you were restricted by the geometry and performance of sized medical devices. Now, with 3D printing, you can offer a customised solution combining a synthetic medical device with a biodegradable bioprinted one and even autologous cells of the patient to enhance the regeneration.

“Even if you could create a functional tissue in a lab environment, the integration with the surrounding tissues is not going to occur instantly. A custom made synthetic medical device will help to hold the structure and promote the integration of the bioprinted living tissue. In short, there are a lot of opportunities and applications of bioprinting, even without the printing of living cells.”

If you think of bioprinting as a technology that recreates all the structure in the same form as shown in living tissue, you are going to fail. Bioprinting is a way of creating cell-laden 3D constructs as a precursor of functional tissue. José: “The maturation and tissue formation process, in vivo or bioreactors mimicking the implantation body, will be as or even more important than the bioprinting one. Delivering on both parts will be crucial to obtain, for instance, the desired functional knee cartilage tissue. We are pioneering both fields!” 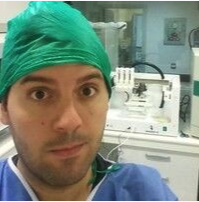 We would like to thank José Manuel Baena Martinez for sharing his experience and expertise. If you have any comments on José’s story, or if you want to share your own story, please contact us via info@biotechnologycommunity.com or +31 630076674.