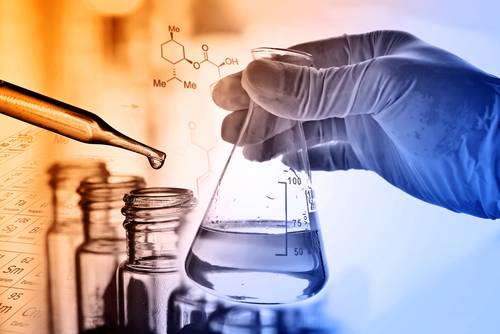 In a study with implications for the future of drug discovery, Scripps Research scientists showed they were able to turn simple chemicals into unique 3-D structures resembling those found in nature — structures with desirable properties for medicines.

In the process, they found a potential drug lead for inflammatory disease, which is now being investigated further. The research appears in Nature Chemistry.

“We were able to start with flat molecules and use a single chemical operation to create much more complex shapes, such as those you would expect from metabolites of medicinal plants or marine organisms,” says Ryan Shenvi, PhD, Scripps Research chemistry professor and senior author of the study. “In essence, we found a way to bridge the gap between the synthetic space and natural products, opening up a whole new realm to explore for potential drugs.”

In the field of drug discovery, compounds made by nature are thought to have some advantages over synthetic molecules, which are created from simple chemical feedstocks. Much of it has to do with their shape: so-called “natural products” tend to have complex, spherical 3-D structures that bind more precisely with molecules in the body, providing favorable drug attributes such as fewer side effects.

Synthetic molecules used in the early stages of drug discovery, on the other hand, are typically flat, simple structures that are more likely to interact broadly with other molecules in the body. However, because they’re so easy to create, they’re more widely available for experimentation. When scientists are looking for a new drug to treat a particular disease, they will often turn to libraries of millions of synthetic molecules in the hopes of finding a needle in the haystack.

For this reason, Shenvi and his Scripps Research lab have been working for several years on creating new tools to “escape flatland” — or build better drug candidates than the flat molecules that dominate traditional drug-screening libraries. The approach described in Nature Chemistry relies on a surprising chemical reaction stumbled upon by the Shenvi group in 2015.

“No one would have predicted that this reaction would work,” says first author Benjamin Huffman, a predoctoral fellow in Shenvi’s lab. “We even tried artificial intelligence-based prediction technology that is currently being rolled out.”

But because the experiment would be relatively quick, Huffman and Shenvi decided to try it anyway, testing it on simple chemical compounds known as butenolides, which are byproducts from the corn oil refining industry. To their surprise, the compounds bonded almost instantaneously — their electron clouds joining together to form a new molecule with unexpected complexity. The remarkable rate of the reaction piqued their interest and suggested an unusual driving force that might prove to be general.

“Our next step was to find out if this reaction would work with other molecules that have different properties,” Shenvi says. “So, we built a small collection of these unusual constructs.”

Initial experiments showed that the reaction has the same effect on many different types of flat synthetic molecules, transforming them into desirable 3-D shapes that look like they could have been produced by a living cell.

A major portion of the study then sought to understand, retrospectively, how the reaction occurred in the first place, which required collaboration with Kendall Houk, PhD, at the University of California, Los Angeles, and postdoctoral fellow Shuming Chen, PhD, in Houk’s lab. One challenge was the speed of the reaction; it happened inexplicably fast, rendering the commonly used measurement tools useless.

Shenvi likens the reaction to “warp drive” in the TV series Star Trek, which enabled interstellar travelers to reach new frontiers of space faster than ever before. However, this chemical warp drive allows the researchers to explore distant regions chemical space.

Already, the approach has turned up one potential new drug lead: a compound that inhibits the expression of a protein known to play a role in autoimmune diseases.

After handing off the compound collection to Calibr’s high-throughput screening facility, one of the molecules was immediately identified by Scripps Research staff scientist Emily Chin, PhD, and Professor Luke Lairson, PhD, of the Chemistry Department, for its ability act on a cell signaling pathway known as cGAS/STING. This pathway plays a key role in inflammation and is implicated in autoimmune disorders. The Lairson and Shenvi labs are continuing to investigate the possible lead.

“We are now taking a step back to carefully analyze the chemistry and see if we can expand this kind of result to other areas,” Shenvi says. “Our goal is to blur the line between synthetic and natural product space and enable the discovery of new disease-relevant mechanisms.”

Published by sciencedaily.com on February 10, 2020
Image from Shutterstock