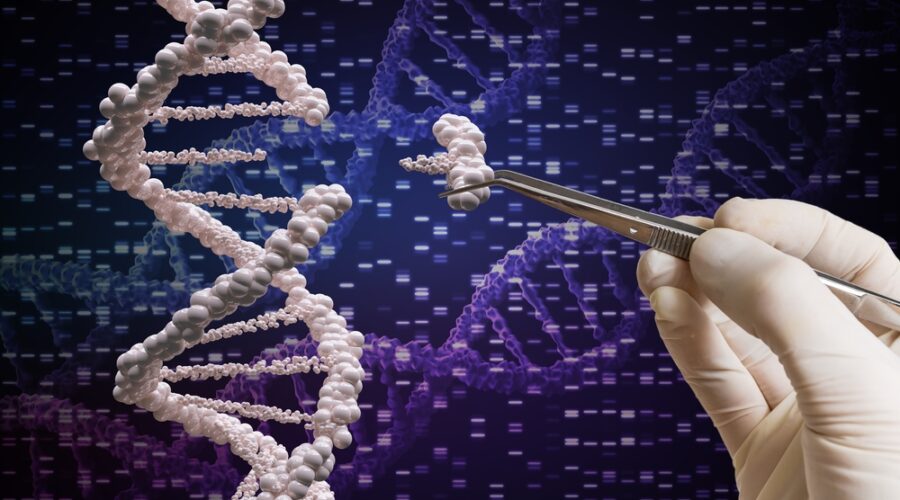 All medical breakthroughs have to start somewhere, and Intellia Therapeutics is ready to show the world the first-in-human gene editing data that could be the start of a watershed moment in advancements for genetic diseases.

Interim results are in for Intellia and partner Regeneron’s in vivo CRISPR/Cas9 genome editing candidate, NTLA-2001, in patients with transthyretin (ATTR) amyloidosis—and the numbers look good.

NTLA-2001 reduced serum levels of transthyretin, a key biomarker for the disease, by 87% in patients who received a higher dose. This result bested the standard of care therapy, which typically reduces transthyretin by 80%.

“It’s actually beyond what we expected, which is a wonderful thing,” said David Lebwohl, M.D., Intellia’s chief medical officer.
Lebwohl said the therapy itself could be a great option for patients with amyloidosis, but the results are bigger than that. This is the first time gene editing has been proven to work in humans, which “opens up a whole new area of therapies for patients that wasn’t there.”

The hope is that NTLA-2001’s effects will prove durable after a one-time treatment, although the initial data are only from about a month out. While this early analysis doesn’t demonstrate that the treatment has clinical effects, Lebwohl said the reduction in serum levels is a known biomarker in ATTR amyloidosis that signals a patient benefit.

The results suggest that Intellia is on the right track with the higher dose, which has informed further escalation studies down the line.

NTLA-2001 works by deploying lipid nanoparticles to the liver to drop off a two-part genome editing system. The first part is a guide RNA specific to the disease-causing gene, and the second part is a messenger RNA—the tech made famous by COVID-19 vaccines—to encode the Cas9 protein and carry out precision editing.

CRISPR/Cas9 therapies work a lot like a vaccine, Lebwohl said. These treatments differ from gene therapies, some of which are already FDA-approved, because they do not use a virus to deliver the gene-altering properties. Gene therapies also wear off over time, he said.

In this study, the gene editing therapy was delivered to the liver—which is the source of malformed transthyretin that builds up in the blood—but Lebwohl thinks they can take it further. Intellia has its eye on bone marrow delivery, thanks to a grant from the Bill & Melinda Gates Foundation, which could lead to a treatment that could reverse sickle cell anemia. Other options include cardiovascular indications.

“The potential is to some degree unlimited,” he said. “Really it’s just using our imagination of how we can affect human disease more profoundly.”

And Lebwohl should know: He was on the team at Novartis that developed the blood cancer gene therapy Kymriah.

“I’ve worked on some amazing drugs. This is even more amazing to have something that can profoundly change the patient’s life,” Lebwohl said.

Intellia struck a partnership with Regeneron back in 2016 to work on in vivo CRISPR/Cas9 gene-editing technology. In a statement, Regeneron said the study is exciting for patients but also for the entire scientific community that has been working on genetics-based medicines. Lebwohl said Regeneron brought expertise in cardiovascular disease to the table.

The Regeneron deal includes work in hemophilia A and B, while Intellia has pipeline projects underway in hereditary angioedema, acute myeloid leukemia, solid tumors and others.

ATTR amyloidosis is a rare and fatal disease that occurs in people born with TTR gene mutations, which cause the liver to produce abnormal, often misfolded TTR proteins. The damaged proteins, which in a healthy form help carry thyroid hormone and vitamin A in the blood, build up in the body, causing a host of problems to the nervous system, heart and other organs.

Intellia is initially going after the polyneuropathy subtype of the disease, which shows up as nerve damage. But the company wants to launch into the cardiomyopathy manifestation as well, which can eventually result in heart failure.

Lebwohl said Intellia chose to start with the polyneuropathy subtype because patients with cardiomyopathy tend to be very sick, meaning the therapy’s effects would be hard to separate from the many complications seen with this type of the disease.

Patients with ATTR amyloidosis have a few options, including Alnylam’s Onpattro, which brought in $306 million during 2020, or Ionis’ Tegsedi. Pfizer’s Vyndaqel is FDA-approved for the cardiomyopathy type of the disease and cleared to treat ATTR polyneuropathy in several other countries.

Intellia wants to target all forms of the disease, including wild type and in patients who are older, so the company will be having conversations with regulators “in the near future” to see how quickly it can move forward. The polyneuropathy type affects “tens of thousands” of people around the world, while the more severe cardiomyopathy manifestation is in the hundreds of thousands, Lebwohl said.

“It’s a diagnosis that is … increasingly being made because people are recognizing it,” Lebwohl said.

Are you looking to join an organisation where you can contribute to their research and potentially change the lives of patients? Click HERE!