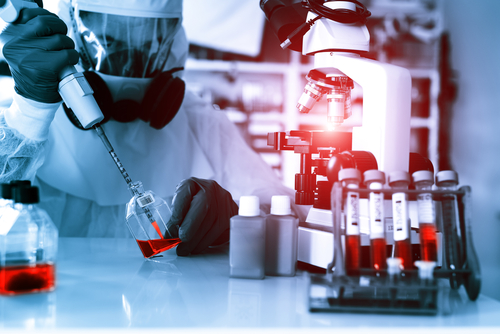 Two Cambridge, Massachusetts biotechs (Beam and Magenta Therapeutics) announced Monday that they are working together to study whether a targeted antibody treatment can help better prepare patients’ bodies to receive gene editing therapy.

One of the biotechs, Beam Therapeutics, uses CRISPR technology to correct small errors in the human genetic code, and says it’s been able to edit individual DNA bases in hematopoietic stem cells. Yet, for these cells to work, they need space in the bone marrow to establish and grow. To make this space, patients go through “conditioning,” a process that depletes bone marrow cells typically by chemotherapy or radiation.

Beam and its new partner, Magenta Therapeutics, want to test if antibody drug conjugates, a type of targeted therapy, can condition patients in a more effective or less toxic way. The companies are focusing on one of Magenta’s experimental medicines, called MGTA-117, which they say only latches onto hematopoietic stem cells and progenitor cells. Specifically, they’ll be researching how Magenta’s drug works in patients with sickle cell disease or beta-thalassemia who receive Beam’s base editing therapies

Dive Insight:
Antibody drug conjugates, or ADCs, are Y-shaped antibodies equipped with cytotoxic chemicals. So far, ADCs have mostly been used as a type of targeted cancer treatment. Over the last year or so, ones from Roche, Daiichi Sankyo, AstraZeneca and Seattle Genetics all received approval from Food and Drug Administration.

Yet there’s also evidence these drugs could be helpful conditioning agents, which are in high demand considering the rapid pace at which the cell and gene therapy field is expanding.

Last year, when Vertex and partner CRISPR Therapeutics were detailing the first data to come from patients given their gene-edited stem cells, the companies said one patient experienced pneumonia in the presence of neutropenia and veno-occlusive liver disease — a side effect linked to the chemotherapy pre-conditioning. (The companies recently disclosed updated data from that research program at the European Hematology Association’s annual meeting.)

Magenta’s more targeted technology has therefore been attractive to both Beam and others. In May, Cambridge-based Avrobio linked up with Magenta in a similar collaboration focused on evaluating an ADC as a conditioning treatment for Avrobio’s lentiviral gene therapies.

Magenta launched in late 2016 with nearly $50 million from venture capital firms Atlas Venture and Third Rock Ventures. Its most advanced drug came from a licensing deal with Novartis, and is in mid-stage testing as a conditioning treatment for patients who have blood cancer or inherited metabolic disorders and are undergoing stem cell transplants.

Beam formed around the labs of David Liu, Feng Zhang, and Keith Joung at Harvard University and the Broad Institute at the Massachusetts Institute of Technology. The company launched in spring 2018 with $87 million available from a Series A funding round led by F-Prime Capital Partners and Arch Venture Partners. In February of this year, Beam completed an oversubscribed initial public offering that netted it $188 million.

Published by biopharmadive.com on June 15, 2020
Image from Shutterstock