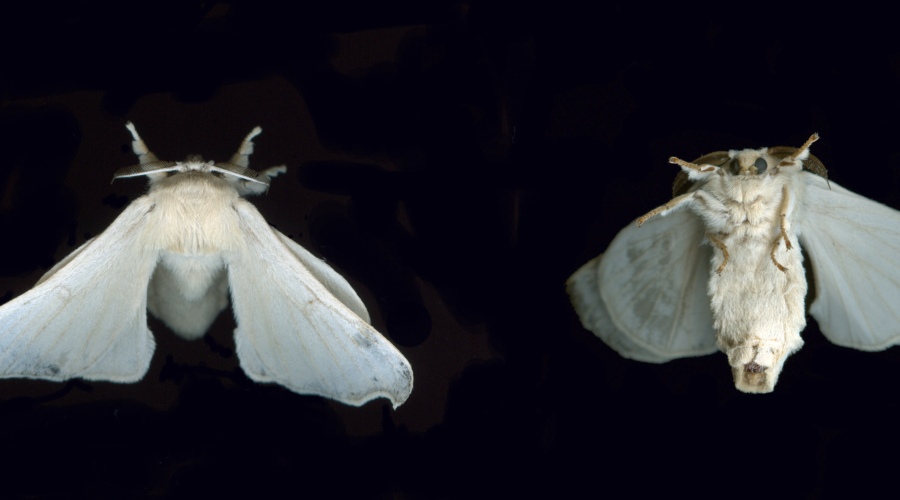 Researchers at Tufts University have developed a method to make silk-based materials that refuse to stick to water, or almost anything else containing water for that matter. In fact, the modified silk, which can be molded into forms like plastic, or coated onto surfaces as a film, has non-stick properties that surpass those of nonstick surfaces typically used on cookware, and it could see applications that extend into a wide range of consumer products, as well as medicine.

Silk is a natural fiber spun by moths and has been used for thousands of years to make durable and fine fabrics—and surgical sutures to close wounds.

More recently, scientists have learned to break down the fibers to their basic protein element—silk fibroin—and reconstitute it into gels, films, sponges, and other forms to create everything from implantable orthopedic screws to textile inks that change color in response to body chemistry.

“What makes silk such a unique material is that not only can it take on a wide range of forms and shapes, but one can easily change its properties by chemically modifying the silk fibroin,” said Krishna Kumar, Robinson Professor of Chemistry at Tufts.

“If we want to make orthopedic screws that are absorbed by the body at different rates using silk fibroin, we modify the chemistry,” he said. “If we want to create a blood sensor that detects oxygen, or glucose, or other blood components, we modify the chemistry. In this study, we modified silk fibroin to repel water, and we can do it in a way that can ‘tune’ the material to be more or less water repellant.

Addition of Carbon and Fluorine

Turning silk into a water-repellant material involved covering the surface of the silk fibroin with short chemical chains containing carbon and fluorine, called perfluorocarbons. These chains are very stable and do not react with other chemicals, nor do they interact with proteins and other biological chemicals in the body.

While the natural surface of the silk protein acts like a magnet to water, with negatively and positively charged branches on the silk attracting water, a silk protein covered with perfluorocarbons leaves little for the water to grab onto.

Perfluorocarbons even resist attraction caused by other forces that typically bring molecules together. Changing the number and length of perfluorocarbon chains on the silk protein can adjust how ‘unsticky’ it behaves.  Luke Davis, Assistant Professor of Chemistry, established the level of fluorine required on the surface of silk to exhibit nonstick behaviour.

The chemical synthesis is done under mild conditions, so unlike the production of other non-stick substances, the manufacturing process could be safer, both for workers and the environment Safer manufacturing and a renewable biological source of the material checks off two boxes for sustainability.

The Tufts researchers measured the nonstick property by observing how water beads up on the surface of the material—like how water rolls off a waxed car. In fact, on nonstick silk molded into bars using the highest level of perfluorocarbons, the water rolled up into drops that are rounded even tighter than they do on Teflon.

It’s not just water that rolls off the nonstick silk, but any substance that has water as a major component, which could include various foods, blood, cells, and tissues. Although not tested in this study, perfluorinated materials are known to repel oils as well.

“Modifying medical devices to prevent detrimental interactions with water and other biologics has the potential to preserve strength and integrity for as long as they are needed,” explained Julia Fountain, a graduate student in Kumar’s lab and co-author of the paper. “Silk is already relatively inert to the immune system, so tuning its ability to repel cells or other substances could make it even more useful.”

The advantages of highly nonstick surfaces go well beyond medical applications. While there is concern regarding chemicals absorbed in the body from commercially available nonstick coatings, silk-based non-stick surfaces may offer an alternative option that can be explored for its relative safety.

One could also imagine automotive windshields where rainwater just rolls off without using wipers, coatings on metals that help prevent rust, or fabrics to make them easier to clean.

“The success we had with modifying silk to repel water extends our successes with chemically modifying silk for other functionalities—such as the ability to change color, conduct electrical charge, or persist or degrade in a biological environment,” said David Kaplan, Stern Family Professor of Engineering at Tufts. “As a protein, silk lends itself well to modular chemistry – the ability to ‘plug in’ different functional components on a natural scaffold.”