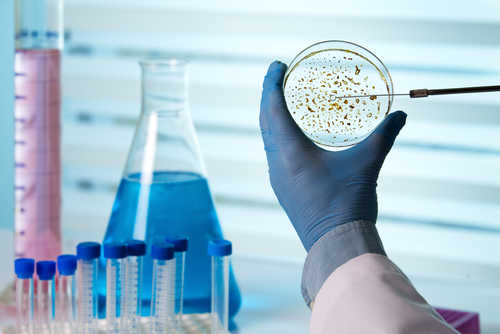 Researchers in Germany and France have combined synthetic biology with microfluidics to create artificial photosynthetic droplets, which could lead to the production of organic chemicals and clean fuels that is more efficient than nature can achieve alone.

In a study recently published in Science, the research team developed an automated way to produce artificial versions of chloroplasts, the center of photosynthesis in plants. These chloroplasts — made within tiny droplets — were capable of capturing carbon dioxide using light as much as 100 times more efficiently than previous synthetic biology approaches.

To make these artificial chloroplasts, members of the team at the Max Planck Institute for Terrestrial Microbiology in Germany coupled natural chloroplast membranes from spinach with a synthetic enzymatic module called the CETCH cycle. The CETCH cycle is made up of 18 biocatalysts designed to convert carbon dioxide more efficiently than plants.

These two components were combined in a cell-sized droplet using a microfluidic technology platform with the help of researchers based at the Centre de Recherché Paul Pascal, France.

“Our work shows that you can realize alternative, autonomous photosynthetic systems at the microscale from individual biological parts and not by modifying cells through genetic engineering,” said Tobias Erb, Professor at the Max Planck Institute for Terrestrial Microbiology, and one of the leaders of the study. “This is a step forward towards creating biological systems that show life-like properties from the bottom up.”

This synthetic biology technology is currently in its early stages, but the potential applications are limited only by what can be produced by the enzymatic pathway, and the contents of the droplet. For example, this could lead to breakthroughs in biofuel production, or large-scale manufacturing of chemicals like antibiotics.

“Currently, this is a proof of principle. There are several challenges to be overcome before we can employ artificial chloroplasts in an industrial setup,” Erb explained. “Most importantly: stability and robustness of the individual components.

“However, if we think about an immediate application, there is huge potential in using our artificial chloroplasts in high-throughput screening of enzymes and prototyping metabolic pathways.”

As an example of the immediate commercial potential of the microfluidics platform, another one of the team leaders, Jean-Christophe Baret at the Centre de Recherché Paul Pascal, co-founded the startup Emulseo on the back of similar droplet technology in 2018.

This is not the first attempt at applying synthetic biology to photosynthesis. In a study published last year, the Earth-Life Science Institute in Tokyo constructed artificial cells using minimal components able to supply the energy to drive gene expression in a microcompartment.

“They used this ‘energy module’ to operate one single enzyme, but not a complex metabolic network with multiple reactions like in our case,” said Erb. “This did not allow the continuous fixation of carbon dioxide into multi-carbon compounds and was notably one to two orders of magnitude slower.”

Synthetic biology companies have drawn major investor interest in recent years. One of the latest examples is a €6.4M Series A round raised by the Swedish startup Enginzyme to fund the development of cell-free technology to manufacture plastics and rubber more sustainably than with fossil fuels.

Published by labiotech.eu on May 15, 2020
Image from Shutterstock