These Nanobots Can Swim Around a Wound and Kill Bacteria 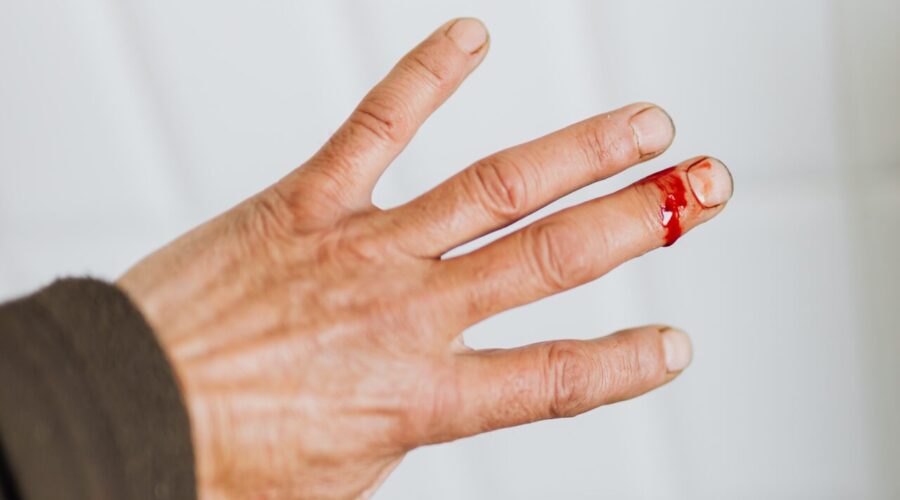 Researchers have created autonomous particles covered with patches of protein “motors.” They hope these bots will tote lifesaving drugs through bodily fluids around a wound for instance.

There’s always been something seductive about a nanobot. Comic books and movies implore you to imagine these things, thousands of times thinner than a human hair and able to cruise around a body and repair a bone or heal an illness. (Or, if they’re more nefarious, simply explode.) Their scale is unfathomably finite. Their possibilities, sci-fi will have you believe, wildly infinite. While that incongruity makes it perfect for the denizens of a writers’ room figuring out how to kill James Bond, it’s also a sort of curse. Surely we can’t take tech like this seriously. Can we?

It turns out, the nanobots are among us. For over a decade, Samuel Sánchez, a chemist with the Institute for Bioengineering of Catalonia, in Barcelona, has been envisioning nanobots that could carry useful payloads, like cancer drugs or antibiotics, through the body’s viscous fluids.

Picture a spherical particle of silica, which functions as a chassis. Sánchez has shown that you can dot its surface with a mess of special proteins that propel the particle through fluid, like little motors. His lab has experimented with different chassis, motors, and cargo. In research published in late April, they joined forces with antibiotics researchers. The team loaded silica nanobots with experimental antibiotics—including one derived from wasp venom—to treat infected wounds on mice. The nanobots, which were dropped onto one end of an infected wound, traveled through the skin to treat the entire area—the first report of nanobots killing bacteria in animals.

“We see that the whole wound gets covered. The machines can actually travel around the wound and clear the infection as they go,” says ‪César de la Fuente, a bioengineer at the University of Pennsylvania who led the project with Sánchez.

That matters, because drugs normally depend on diffusion, or the process of passively spreading through the body’s fluids. If the most perfect antibiotic in the world can diffuse only as well as a brick in a tub of jelly—well, it’s not perfect.

Antibiotics and chemotherapies are often small molecules. They move at the whims of whatever fluid they’re in. If you pump ciprofloxacin into someone’s veins to treat a bloodstream infection, their blood flow will take that antibiotic wherever it needs to go. But what about the germs hiding within mucus, a much thicker fluid? Or lingering as dense biofilms in the lungs? “The antibiotic typically just kills the bacteria around the area where you put it, but the antibiotic itself cannot really travel,” says de la Fuente.

That’s why these drugs need mini motors. Sánchez envisions a nanobot delivering drugs to infections within viscous fluids like sebum, or cancers near stagnant fluids like those in the bladder. “In places where the viscosity is high or the diffusion is very low, that is where you need motion,” says Sánchez. “If you don’t have motion or propulsion, then you’ll never get from point A to B.”

“It’s a nice demonstration of the power of active systems,” says Jan van Hest, a bioorganic chemist at Holland’s Eindhoven University of Technology, who was not involved in the work. Nanobots likely won’t replace run-of-the-mill antibiotics, since those must often be simple and cheap. Yet van Hest quickly points out a couple of other situations in which achieving motion is worth the expense and hassle of nanobots: disassembling blood clots and keeping hip implants infection-free. “I could imagine that—to let them walk around the interface between the implant and the infected tissue,” he says.

De la Fuente is also excited about this new avenue, since scientists have struggled to invent new antibiotics and new ways to administer them. “When we saw that the infection got resolved,” he says, “that was the proof. I’m convinced this can have a future in trying to more effectively resolve infections.”

De la Fuente’s lab focuses on discovering new antibiotics, primarily in the form of peptides, which occur naturally as germ killers across the animal kingdom. Peptides are strings of up to a few dozen amino acids—like short fragments of proteins. The trouble is, their diffusion is slow, and the body degrades these kinds of small molecules. De la Fuente wondered how to get them to navigate a dense wound or biofilm faster than diffusion would allow. He had followed Sánchez’s work for years, including his lab’s recent demonstrations that nanomotors could carry and dispense anticancer drugs, and that they could swim autonomously around the bladders of mice. The two labs teamed up, combining their technologies.

Sánchez’s team created two sizes of bots made of silicon dioxide (or silica): nanoparticles and slightly larger microparticles. They used a protein called urease to propel those chassis. Urease is an enzyme that turns the body’s urea into ammonia and carbon dioxide. Like a car’s engine, that enzyme turns a chemical reaction into mechanical energy; urea is its fuel.

The trick, Sánchez says, is to cover the bots with motors asymmetrically. Patchy, lopsided motor placement lets the bot move chaotically away from its starting point rather than circling around it. “Perfect is not nice,” he jokes.

De la Fuente’s lab contributed the cargo, one of two antimicrobial peptides: LL-37, a long natural antimicrobial peptide, or K7-Pol, a shorter synthetic one derived from wasp venom. Either one will disintegrate a bacterial cell membrane, basically melting a germ and rendering it useless. (K7-Pol has shown potency in labs against parasites and cancer cells, too.)

Next, they proved that the bots could swim. In test tubes containing urea, the microbots reached speeds of up to 4 micrometers per second—“one or two body lengths per second,” says Sánchez. (Humans also swim around one body-length per second.)

Then it was time to show that the bots could also kill. But the team agonised over how to prove that they could actually treat an animal’s infection better than by just using passive drops of antibiotics. “That took some time,” de la Fuente says.

In the end, they devised a setup to test two important criteria: that antimicrobial micro or nanobots can treat infected mice and that their active motion plays a central role in that. The team used a needle to carefully scratch the backs of lab mice and introduced a superbug called Acinetobacter baumannii to infect the length of each wound. The process formed dense, hard-to-treat abscesses. On some mice, they dripped a dose of one of the two antibiotics at a single end of the abscess. Those doses had no nanobots, so to clear the infection the drug would have to diffuse on its own from one end of the wound to the other.

Next, a separate set of mice received thousands of antimicrobial bots administered in a tiny droplet. Some mice got bots loaded with LL-37, some got bots with K7-Pol. The team covered each wound with some nontoxic urea, expecting the bots would gobble the fuel and cover more ground.

That’s exactly what happened. Wounds that received antibiotics without bots only improved locally. The number of bacteria fell by 100 to 1,000 times—but only at the extremity of the wound where the dose was delivered. The rest of the wound fared as it would have if it had received no treatment.

But the nanobots carrying either antimicrobial peptide treated the entire wound and reduced the number of bacteria inside the wound 100- to 1,000-fold throughout its length, to levels that an immune system could handle.

And to clinch it all, when the scientists withheld the urea fuel, they found that the antibiotic bots didn’t heal the entire infection. Without that fuel, they only worked locally, just as the drugs without bots had. The fuel was essential—meaning the motor’s motion was essential, the team concluded.

The result is one of the most conclusive examples of the practical uses of nanomotors, according to van Hest. “It’s always very difficult to establish if this is really an effect of the motility of the particle,” he says. “In this case, the proof is direct and clear.”

Another application would be for treating kidney stones, which often harbor bacterial biofilms along hard-to-reach crevices. “When you go to operate on them, the bacteria can shower inside the patient and make them very sick,” he says. Similarly, urothelial carcinomas that affect the lining of the bladder, ureter, and kidney also grow in tight spaces that complicate treatment. He thinks self-propelled drugs could help doctors attack these elusive tumors and germs. Plus, between the urinary tract, bladder, and kidneys, you’ve got “plenty of fuel,” Dahl notes—enough urea to power a nano army.

In 1966, the sci-fi film Fantastic Voyage imagined a shrunken submarine on a mission through the bloodstream. While Sánchez’s nanobots can’t work in blood that flows much faster than they can move, he still envisions fantastic voyages through the body’s slower-moving fluids, like mucus and the skin’s interstitial fluid. And nanobots still have a way of making people dream about ideas on the border of reality. “As scientists, we’re all inspired by science fiction,” says de la Fuente. “And I think our job sometimes is to try to get those two worlds closer together. What seems science fiction today, hopefully, in a number of years, becomes reality.”