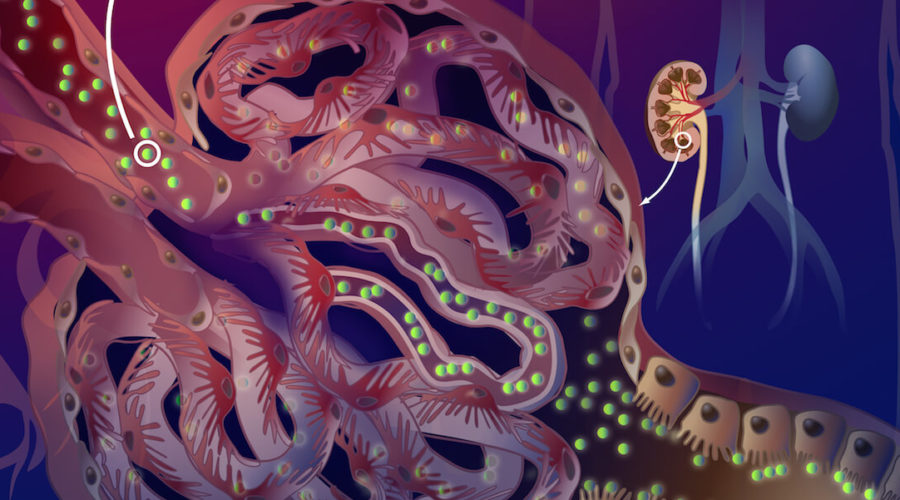 Remember the scene in the movie Mission: Impossible when Tom Cruise has to sneak into the vault? He had to do all sorts of moves to avoid detection. That’s what it’s like to sneak a targeted drug into a kidney and keep it from getting eliminated from the body.

Since kidneys are the filtering agents in our body, they are keen to get rid of small particles that they sense do not belong. And if the kidney does not filter out a particle, excreting it through urine, it may be eliminated by the liver, which uses macrophages to search for and get rid of foreign bodies.

Researchers at the USC Viterbi School of Engineering, along with colleagues from the Keck School of Medicine at USC, have engineered peptide nanoparticles to outsmart the biological system and target the kidney cells. The innovation may prove critical to addressing chronic kidney disease.

One out of three Americans will have chronic kidney disease in his/her lifetime. To date, there have been few solutions for advanced kidney disease beyond dialysis and kidney transplant—both of which are incredibly expensive and taxing. Previously, doctors would also have to prescribe heavy doses of medication as they hoped some of the medication would be able to reach and target the kidney. However, this heavy dosing had adverse effects on other organs in the body.

While targeted drug delivery has long been an area of concentration for cancer research, nanoparticles for targeted drug delivery for the kidneys has largely gone unexplored, says the study’s lead author, Eun Ji Chung, a WiSE Gabilan Assistant Professor and Assistant Professor of Biomedical Engineering, Chemical Engineering and Materials Science, and Nephrology and Hypertension at USC and a professor in the new USC Michelson Center for Convergent Bioscience.

Essentially, the researchers took several months to create their kidney targeting particle. This nanoparticle is a micelle, which is 10-20 times smaller than a traditional nanoparticle. This particular micelle is synthesized from a peptide chain that is formulated from lysine and glutamic acids. The extra small size of the nanoparticle allows passage into the kidneys through the initial barrier of kidney filtration while the peptide allows the nanoparticle to stay in the kidneys and potentially unload a drug at the site of the disease without getting removed by the urine. In this way, the researchers are taking advantage of a natural mechanism of the body to target the kidneys, and can minimize systemic off-target side effects that are characteristic to most kidney drugs.

Results of In Vivo Testing:

The researchers injected mice with fluorescent-labeled nanoparticles. They found that the nanoparticles they had engineered were more present in the kidney than other parts of the body. These particles thus could carry drugs more selectively than previous tests by other researchers. Furthermore, these biocompatible, bio-degradable particles were able to clear out of the body in less than one week and would not damage other organs.

The study “Design and in vivo characterization of kidney-targeting multimodal micelles for renal drug delivery,” was conducted by Eun Ji Chung, Jonathan Wang, Christopher Poon, Deborah Chin, Sarah Milkowski, Vivian Lu at the Viterbi School of Engineering; and Kenneth R. Hallows of the Keck School of Medicine at USC. It was featured in the journal Nano Research and Professor Chung was selected as a Young Innovator in Nanobiotechnology from the journal.

Funding for this research came from the University of Southern California (Provost Fellowship), the National Heart, Lung, and Blood Institute at the NIH, and the U.S. Department of Defense.

Published by viterbischool.usc.edu on August 22, 2018